The highlight of my life this past week has been my son driving the car all by himself. If you didn’t read my post yesterday, read it so that you’ll have some idea what I am talking about here.
I was working on one project the whole day yesterday but my mind and heart was with my son, Abel.
When it was round 6:15pm, my son came home and I ran to the door and hugged and kissed him. My first question for him was: “How was it? Did the car slip or slide?”
And guess what his dad asked him? “How far did you guys go with the project?”
Why did my Berhan and I ask our son different questions? Well, because we are two different people, and one of our differences is this: he is a father and I am a mother. What concerns me doesn’t usually concern him and vice versa. My last worry yesterday was about my son’s school project. Even if I knew that the project was one of those AP courses which will help determine my son’s next undertaking, I couldn’t care less about it. In the middle of the day, the snow turned into ice which made the road very slippery, so do you expect me to worry about his school project? Oh, no, not a chance.
Abel smiled at my question; and hugged and kissed me back and said, “No, the car didn’t slip, Mom. It is not that bad out there,” and he turned to his dad and talked in detail about the project.
Then when we were about to pray for dinner, I asked Abel to pray and his prayer was: “Thank You, Lord, for bringing us home safe from the slippery road out there; thank You for helping us all with our projects today – – -”
My role as a mother in my son’s life and my husband’s role in his son’s life as a father are different but equally important for our son’s mental, physical, spiritual and emotional growth. I can’t replace my husband’s role, nor can he replace mine. I help my son get in touch with life at an emotional level while his dad helps him get in touch with his God given strength AS A MAN. I prepare him to be sensitive to the needs and desires of the woman he is going to pursue, and his dad prepares him to be a man of his household – a man who doesn’t fear challenge but faces it head on as a man so that he can lead his wife and children in integrity and strength, the two most important qualities of a real godly man.
We, Abel’s mom and dad, are equally important for Abel’s healthy growth. I am not the only one who came up with this conclusive statement; many scientists, researchers, and thinkers of our times are shouting their lungs out saying, “Both a mother and a father are equally important for a child’s growth.”
However many people don’t seem to hear them. Media threw them and their research results out of the window saying, “Two mothers can replace a father” or “two fathers can replace a mother.” Why are they saying that? I’m not really sure, but the Bible says, “Whoever has ears, let them hear.” (Matthew 11:15) What do they need to hear? That it is not a man who came up with the idea of a mother and a father, but God. God’s finger prints are primarily seen by this: No child came to this life out of two sperms or two eggs. /// 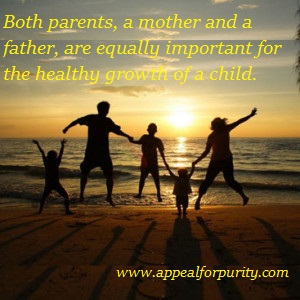