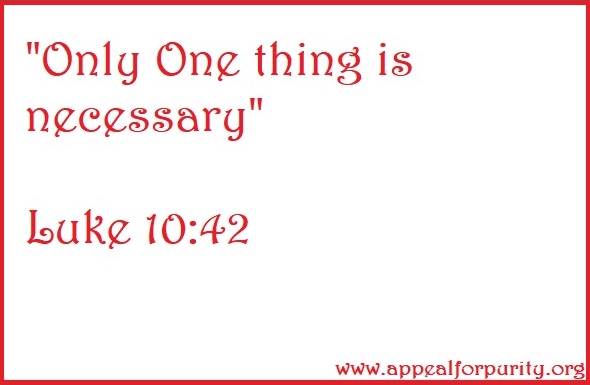 The Bible says,
“Now as they were traveling along, He entered a village; and a woman named Martha welcomed Him into her home. She had a sister called Mary, who was seated at the Lord’s feet, listening to His word. But Martha was distracted with all her preparations; and she came up to Him and said, “Lord, do You not care that my sister has left me to do all the serving alone? Then tell her to help me.” But the Lord answered and said to her, “Martha, Martha, you are worried and bothered about so many things; but only one thing is necessary, for Mary has chosen the good part, which shall not be taken away from her.”” Luke 10:38-42 NASB
Mary chose “one thing,” and that one thing is to sit “at the Lord’s feet, listening to His word.”
Martha chose to run around and make a name for herself. That effort filled her with everything but gratefulness and thankfulness. She complained about everything and everybody, including Jesus Christ.
Jesus Christ Himself fell short of Martha’s standard.
Martha must have thought, “If Jesus was the Man who He claimed to be, He would have noticed how hard I was working all by myself while Mary was just sitting at His feet, doing absolutely nothing.”
Martha accused Jesus Christ and Mary of not caring much for others.
Why?
Martha’s focus was everything but the word of God.
The word of God says,
“But he who listens to me shall live securely
And will be at ease from the dread of evil.” Proverbs 1:33 NASB
Martha was “worried and bothered about so many things,” while one thing was needed, the word of God.
What did you choose over the word of God today?
How is that working for you?
Martha was “distracted with all her preparations,” while Mary “was seated at the Lord’s feet, listening to His word”.
Wow! What a striking difference!
I don’t know about you but for me personally, I choose today to be Mary for all other things in this life are “added things” and don’t need all my heart, mind, soul and strength.
“But seek first His kingdom and His righteousness, and all these things will be added to you” Matthew 6:33 NASB ///