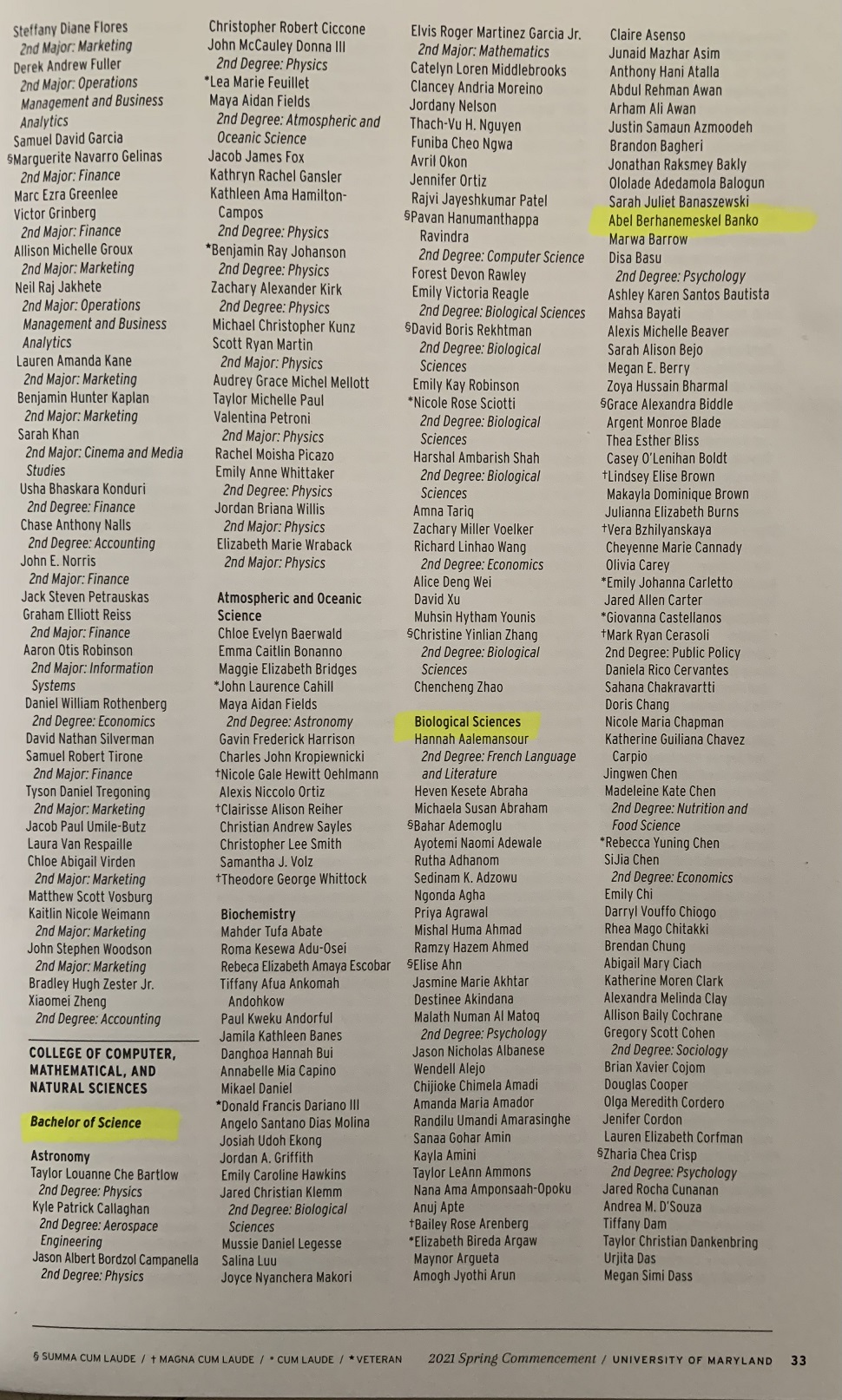 I don’t know if you attend any graduation ceremonies these days.

Because of COVID, everything has been changed, including how graduation proceedings are conducted.

In the first place, the whole family cannot attend the ceremony, as it used to be. Only two people (they don’t want to say ‘father and mother’ because some people have two fathers or two mothers; go figure!).

So, my husband and I went to attend our son’s, Abel’s, graduation ceremony last Friday.

You have no idea how excited I was. And truth be told, my son didn’t want to go and my Berhan was not that much excited to attend the ceremony. He kept on saying to me, “Remember, there is nothing exciting because of COVID.”

Did I listen to my husband?

I was like, “It doesn’t matter! We will go and Abel attends his graduation ceremony.”

Since they knew me well, they quietly just followed suit.

To make a long story short, the ceremony started and they didn’t call anybody’s name. After a couple of speeches, all they did was call the department and all students who were graduating from that particular department would get up and everybody would clap for them.

You have no idea how frustrated and discouraged I was. I mean, hello! For crying out loud, can you at least call my brilliant son’s name and make his ma’am happy and proud?

Nope they did not!

How long did that take? Half a minute, without any exaggeration and after that both Abel and Berhan turned to me and said, “Let’s go! There is nothing from this point on unless you want to hang around.”

I wanted to cry but I didn’t want them to call me a “crying baby!”

The moment I got home, I pulled his graduation magazine out and looked for my son’s name?, on the page I am sharing with you today, I found my son’s name and I smiled!

Then I remembered our graduation magazines when both, Berhan and I, graduated from this same university, University of Maryland (UMD).

We don’t even know where those magazines are now and we don’t really care much.

It’s passed! It is old! Nobody congratulates us anymore! And we don’t walk proudly now thinking we’re graduates of UMD. We don’t even remember and none of my families and friends remember that.

But before sadness took over my soul, I remembered the One Book that contains list and list of names.

If my name is written in the Book of Life, it will never be forgotten, not by mortal people like me, but by the Creator of Heaven and earth and by His Son, Jesus Christ, who has died for me on the cross.

The Bible says, “And if anyone’s name was not found written in the book of life, he was thrown into the lake of fire.” Revelation 20:15 NASB

Wow! Did you see that?

If your name is not written in the book of life, you will be thrown into the lake of fire.

The Bible says it easily but do you know what “the lake of fire” means?

It means “the wrath of God,” not for one hour or for one year but forever and ever!

After Jesus sent out 70 of His Disciples, giving them authority and power to cast demons out of people, they came back rejoicing.

Luke records the story this way:

“The seventy returned with joy, saying, “Lord, even the demons are subject to us in Your name.””

I can just imagine their excitement. When they walk into the neighborhood, demons are crying left and right and saying, “Please don’t torment us! We will leave this person!”

I can also imagine how they were walking among people, looking down on those who couldn’t do what they were able to do.

What was Jesus’ response to their excitement?

“And He said to them, “I was watching Satan fall from heaven like lightning. Behold, I have given you authority to tread on serpents and scorpions, and over all the power of the enemy, and nothing will injure you. Nevertheless do not rejoice in this, that the spirits are subject to you, but rejoice that your names are recorded in heaven.”” Luke 10:18-20 NASB

Woah! Did you hear that?

Rejoice in the truth which will never pass away! Your citizenship in heaven!

“Then I saw a great white throne and Him who sat upon it, from whose presence earth and heaven fled away, and no place was found for them. And I saw the dead, the great and the small, standing before the throne, and books were opened; and another book was opened, which is the book of life; and the dead were judged from the things which were written in the books, according to their deeds. And the sea gave up the dead which were in it, and death and Hades gave up the dead which were in them; and they were judged, every one of them according to their deeds. Then death and Hades were thrown into the lake of fire. This is the second death, the lake of fire. And if anyone’s name was not found written in the book of life, he was thrown into the lake of fire.” Revelation 20:11-15 NASB

Is your name written in the Book of Life?

Only the names of those who trust in the Lord Jesus Christ will be written in the book of life.

Jesus said, “He who overcomes will thus be clothed in white garments; and I will not erase his name from the book of life, and I will confess his name before My Father and before His angels.” Revelation 3:5 NASB

Jesus said, “But everyone who denies me here on earth, I will also deny before my Father in heaven” Matthew 10:33 NLT

Who are these people whose names are found in the Book of Life?

“For God so loved the world, that He gave His only begotten Son, that whoever believes in Him shall not perish, but have eternal life.” John 3:16 NASB

John writes to us in his first epistle:

It does not say, “When you die, you will know if you go to heaven or hell.”

No, my friend! You will know it while you live in this life. No surprise after death! Only endless surprises are in store for those who paved their own way to get to God outside of the Son of God, Jesus Christ.

Wow! Did you read that?

“I say to you, My friends, do not be afraid of those who kill the body and after that have no more that they can do. But I will warn you whom to fear: fear the One who, after He has killed, has authority to cast into hell; yes, I tell you, fear Him!” Luke 12:4-5 NASB

My friend, what I am sharing with you today is not a temporal thing but an eternal truth.

Jesus said, “Heaven and earth will pass away, but My words will not pass away.” Matthew 24:35 NASB

Know Christ and accept Him as your Lord and Savior and your name will be written in the Book of Life.

The word of God says:

“He [Jesus] came to His own [Jews], and those who were His own did not receive Him. But as many as received Him, to them He gave the right to become children of God, even to those who believe in His name, who were born, not of blood nor of the will of the flesh nor of the will of man, but of God.” John 1:11-13 NASB

“Receive Him” – means, even if He came from the Virgin Mary, looking like a human being, He is the Son of God as God has declared Him. So, receive Him as the word of God calls Him, the Messiah.

May God open your spiritual eyes so you can see His truth clearly! ///