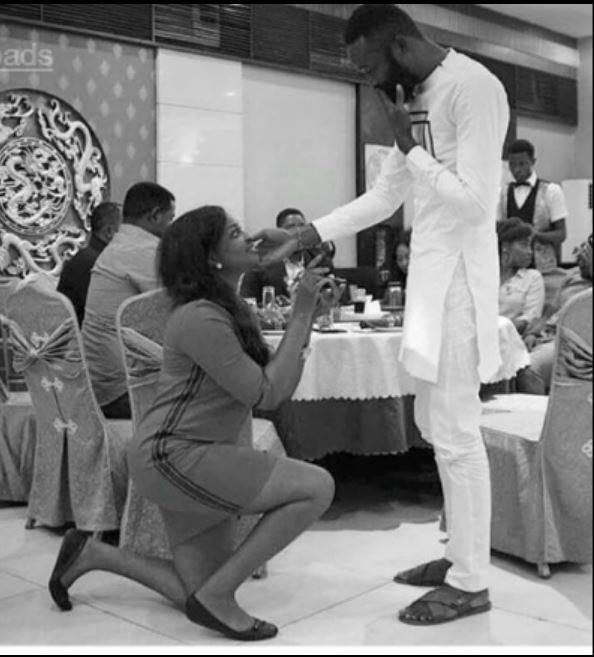 Somebody sent me this picture and asked me to comment on it.
I said to myself, staring at the picture, “So, hold on a second, you want me to comment about this picture?”
A woman, falling on her knees, is proposing to a man and the man, standing up straight, is looking at a woman as if to say, “Awwww! You want me to marry you?”
Somebody recently asked me, “Missy, why are you so adamant about these things? What’s wrong with a woman asking a man for a date, what’s wrong with a woman kneeling down on her knees and proposing to a man she loves? Where in the Bible does it say that it is sinful to do those things?”
Okay, let me first call upon the spirit of self-control to come and take control of me and my mouth before I dare to utter (write) a word.
Okay, so, the Book I am reading every day, the Bible, didn’t put the picture of a woman and a man like this picture.
This picture is primarily a disgraceful presentation of a man because it says to him, “You’re not man enough to pursue a woman and when you find a woman you love, you have no spin to kneel down and ask her to marry you. So, a woman acts like you and asks you to marry her. Then she’ll pick you up from the floor and swirl you around to express her happiness. After that, she’ll sweep you off your feet and take you to the bedroom and starts to take off your clothes.”
This is the kind of script Hollywood movie directors are handing to movie actors and trying to portray on screen something that is contrary to the message of the Scripture.
Why? They are against the Cross!
Read what the Bible says. Read Song of Solomon. Read Proverbs and find two kinds of women there (the one in Proverbs 31 and the other one, the woman who sweeps a man off his feet, in Proverbs 7). Read Revelation and find Jesus’ Bride, the one Jesus fell on the ground like
a kernel of wheat and proposed to her giving up His own life.
Let’s leave Hollywood’s mockery and travesty to this dark world as we behold Jesus Christ, the word of God, that tells us who we are and why we are here. ///