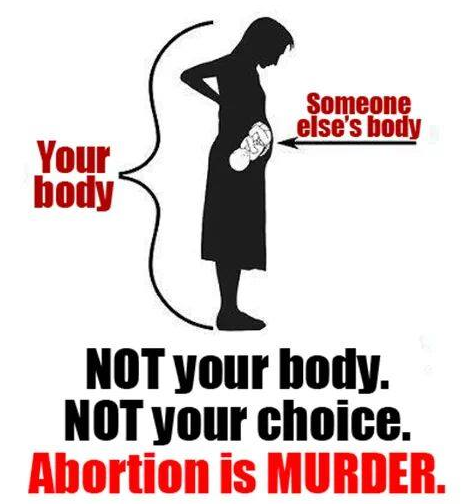 I found this picture on somebody’s Facebook account and I want to share it with you all because it depicts the most simple truth in the most simple way possible, in a simple logic.

Why is this simple truth hidden from many? I am not really sure; but I know that as the Bible says, faith comes by hearing and if Sarah (a random person) keeps on hearing how abortion makes a woman’s life better (as the CNN news channel always presents it as and rallies behind a president candidate who is for abortion), Sarah will always march for abortion (and always casts her vote for a candidate who is for abortion). Why? Because of her strong faith that comes from her consistent “hearing” of the message!

But, I am yet to find a person who is hearing the word of God, not only hearing but striving to live according to the word of God, and is for abortion. Never! Why? The word of God is all about the sanctity of human life and this person can’t miss that.

A good friend of mine, Pastor Nebiye Kelile, left his comment on this particular picture and with his permission; I want to share an excerpt of his comment with you all:

“I and my wife have four children. I partner together with The Pregnancy Resource Center, by offering counseling as a Pastor and alternative resources to ladies who’ve been stuck thinking that the only thing they could do is kill their baby.

I spend time when and where I can in front of Planned Parenthood Facilities preaching and urging women and their men (who join them at times) with the truth of God’s Word and the Gospel of hope.

The abortion procedure is not – ever – necessary to save the life of a mother. – – – The Association of Pro-Life Physicians, whose mission is to practice pro-life medical ethics as the only legitimate means of living out the do no harm clause of the Hippocratic Oath, clarified the subject with the following statement, which can be found within its broader context here:

“We find it extremely unfortunate that many pro-lifers have regarded the health of the mother to be a consideration in whether or not she should have the right to terminate the life of her pre-born baby. Politicians who herald the title “pro-life” on the campaign trail frequently tout this health exception, as well as exceptions for rape and incest, as pragmatic compromises that will not offend political moderates and not alienate the pro-life community. We do not consider this compromise consistent with pro-life Hippocratic principles at all. To intentionally kill or condone the intentional killing of one innocent human being precludes one from being considered “pro-life” at all. A murderer of one person is not any less a murderer if he allows thousands to live, nor if he saves thousands from dying!

When the life of the mother is truly threatened by her pregnancy, if both lives cannot simultaneously be saved, then saving the mother’s life must be the primary aim. If through our careful treatment of the mother’s illness the pre-born patient inadvertently dies or is injured, this is tragic and, if unintentional, is not unethical and is consistent with the pro-life ethic. But the intentional killing of an unborn baby by abortion is never necessary.”

Wow! Did you read that! It’s awesome, isn’t it? You see, abortion is not a political issue; but a life and death issue where one innocent person is put to death for the mistake and decision of others.

If we’ve ever done abortion before, let’s confess our sin to God since abortion is murder and let’s accept our forgiveness from our loving and forgiving God. Then let’s constantly speak against it so that others won’t make the same mistake we’ve done. If we’ve never done abortion before, let’s run away from it and whenever and wherever we can, let’s comfort those who are living with a lifelong pain of post-abortion, without judging them.

May God bless The Association of Pro-Life Physicians, The Pregnancy Resource Center, Focus On the Family and many more ministries, associations and organizations who are making a difference in women’s lives, in the most constructive and life-giving way! ///