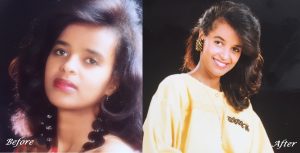 Have I ever shared with you about one of my dreams since I was twelve or thirteen?
Well, I used to dream to be a model. Yes, I know that I was the shortest person among my friends and classmates but I didn’t let that fact stop me from not only wanting to be a model but also pursuing to be one with all my being.

Fast forward a few years, my parents sent me to India thinking that their daughter would go to college and study “very hard”. I mean, I love school, studying and getting a good grade and all; but one of the dominating factors of my life at that point was to be a model. My parents didn’t know that. So, one day my friends and I went to downtown to take a picture for fun. After spending few minutes in the studio, I instantly fell in love with those shiny lights, cameras and the funny cameraman. Well, the feeling was mutual. They loved me too, I thought. The cameraman complimented me multiple times as I followed his instructions perfectly and he took a number of shots and even promised that he would give me some pictures for free. I mean, you can’t beat that! Then, within a week, he blew up one of my pictures and hanged it outside of his shop. I mean, just imagine me. I was like, “OMG! My dream is coming true!”

I don’t want to bore you with the rest of the story but before I visited him again, which was within few weeks after my conversion (becoming a born-again Christian), one evangelist came from Addis Ababa, Ethiopia. It was my very first time to see an Amharic speaking evangelist and I was very excited. Guess who that evangelist was? Well, his name is Daniel Tassewe. He was the first Ethiopian preacher I met in person. So, I lined up most of my questions and went to him (I know, Pastor Daniel reads this; so I need to be careful here, lol). I also planned to ask him all those crazy questions, I mean, about sex and all. I did ask him some of them. I may talk about those questions another time but for today, I’m interested in one of my questions I asked Pastor Daniel: “Is it a sin to be a model?”

Oh, Dani, how much I appreciate you!

When I asked him that question, from his look, I immediately realized with 100% certainty that I was the first person who had ever asked him that kind of question. With a smile and tender voice, he asked, “Why don’t you focus on your school now? And why do you want to be a model?”

I don’t really remember the rest of our conversation but within few minutes, I realized that modeling was not the best dream for me to chase after. I still remember vividly though what I asked him the next day: “What should a person need to do to be a full-time minister?”

Anyways, that was 100 years ago. The fleeting dream to be a model left my life but I went to that cameraman probably once or twice after that. Of course, with my “newly-created” attitude, the lights, the cameras including the cameraman lost interest in me and I lost interest in them as well. But truth to be told, I still like to take pictures. Pictures are good way of saving memories.

Don’t these pictures I’m sharing with you today tell you the “before and after” story I just told you? Do I need to tell you which one of these pictures was hanged in downtown India photo shop? I don’t need to because “a picture is worth a thousand words.” Even though I cropped it a bit to make it presentable for the page, it is still obvious which one I’m referring to. I love both of these pictures equally because they both have their own stories to tell.

Why am I sharing this with you? Well, if you are young with multiple dreams and visions, make sure you share your dreams with others; others who are spiritually more matured than you and others who are older than you and have a vested interested in you. And all the time, strive to have an open mind to listen to others’ advice because the Liar may lie to you in a way that will make it hard for you to clearly see your dreams.

Also ask yourself: How do I benefit myself and others by me wanting to be “this” or wanting to do “this” in my life? The answer for that simple question may help you change your course of direction or give you tremendous courage to pursue your dreams and visions till the end.

P. S. “Is it a sin to be a model?” In my opinion, I don’t think it is as long as the model doesn’t sell her/his body to degrade themselves and/or others.