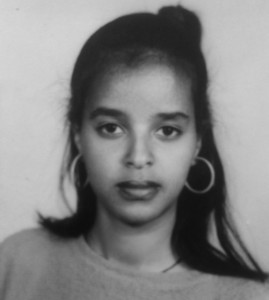 I was 16 years old when I took this picture, which seems like 100 years ago.

So, when my Berhan and I started dating (we were in Addis), I was busy with my school. Berhan used to call me at 9pm sharp, and sometimes we used to talk over the phone for five or six hours straight. Then before I knew it, our phone conversation started affecting my school work.

I said to him one day, “Don’t call me again because you are bothering my study time.” He said, “If that is what makes you happy, okay, I won’t call you.” (Yeah, this man knew me even back then).

This was not the first time I said that to him. I said it like probably two or three times but every time I say something like that, he usually disappears for a week or so and calls me back and we will continue from where we left off.

But at that particular night, I was scared of getting low grades. And apparently I made that “don’t call me” statement very seriously (as he told me later).

Well, this time, after I said “don’t call me”, two and three weeks have passed without him calling me. After waiting for him for another week, I decided to call him but I was very scared. Imagine! What am I going to say to him? Am I going to say “I missed you, how come you didn’t call me”? No, I can’t say that because I told him not to call me. Am I going to say, “I’m just checking on you”? You must be kidding! Nah, he is much smarter than that. He knows that I couldn’t last long without hearing his voice.

During our peaceful days, we were talking about taking pictures and I’ve showed him one of my pictures I took a year earlier for school. He loved one of them (the one I attached to his note) and he said “Can I take it? I will bring it back.” I said, “Okay”. But he never got a chance to return it back.

Well, I couldn’t find a reason to call him but decided to call him anyways. Holding the phone on my hand, while I was thinking what to say, I remembered that picture and I said “Bingo!” So, with confidence, I dialed the number. He picked up the phone and I said, “Hi”. He didn’t seem to be surprised to hear my voice. I said, “I need you to return back my picture.” He said, “Sure, where do you want me to bring it?”

He still denies that he didn’t understand my “sleek move”. Well, I didn’t care about the picture. And he later confessed that he took the picture and made 100 copies of it before he gave it back to me.

So, this picture is one of my souvenirs I treasure the most. It is because of this picture that I was able to bring my man back to me. Yes, he pursued me but I pursued him too; with determination and conviction. I said conviction because I knew all along that he was my man. ///

(This story was originally posted on March 27, 2014 and I love the story very much; especially the picture. I didn’t copy and paste the whole story here. You can read the rest of the story by going to the A4P photo album and click the same picture I attached with this note.)