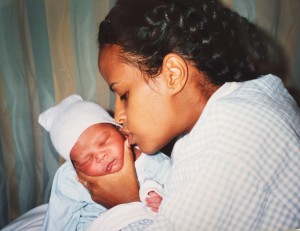 On Friday, September 06, 2002, I was admitted to the hospital. I was pregnant with our youngest son, Biruk. He was growing so fast that they had to induce labor two weeks before his due date. By that time, he was already weighing nine pounds and three ounces. I didn’t gain weight as much as I was expected to because I was hardly able to keep anything down. I didn’t have any sugar or blood pressure problems, but the baby was growing at an alarming rate for no known reasons. When I was admitted to the hospital, I was 100% sure that I was going to have my baby naturally as I had my other kids. Well, when they began monitoring me, my baby’s heartbeat became erratic. They didn’t know why. The heartbeat sounded like the baby was about to stop living.

Imagine my Berhan and I, standing there, staring at the monitor and surrounded by doctors and nurses, who didn’t have any clue what was going on in my womb. I told them I wanted to have the baby naturally; but within few hours of labor, my kind gynecologist came and held my hand and said, “Missy, I am not sure what is going on with the baby; but at this point we, all the gynecologists on the floor, decided to do a C-section. I know you want to have the baby naturally but it is too risky now to try to do that. Let’s hope that nothing is wrong with the baby but I have to be honest with you, I don’t know what to expect.”

Can you just imagine what was going through my mind? I was sweating like crazy. Forget Berhan! He was nervous but he didn’t want to show it to me who was struggling with excruciating labor pain. Then before I knew it, I was in a surgery room. They numbed me from chest down. Then a “thick” silence filled the room. I could see my gynecologist’s face and the nurses around him and I tried to read their faces but they were just silent but I could see their worried faces. Then all of a sudden cheers of laughter broke out and cut through that thick silence and everybody began laughing.

Oh, what heavenly laughter! Then the doctor announced right there, saying, “Missy, it is a boy, and your son grabbed my pinky!”

Yes, there was silence in the room and fear in everybody’s heart but my Faithful God that I worship was in the room too. I praise Him forever!

The picture I shared with you was taken few hours after the surgery.

Today, Biruk Banko officially turned 13. Our family doesn’t celebrate any birthday’s but the 13th a time when a young man is fully capable of making a girl pregnant. We celebrate it in a big way; but not only with food and drink but also with a beautiful ceremony (Jewish calls it “Bar Mitzvah” literally means “son of the commandment” – we change it to son/daughter). I wish I could invite you all. It is a celebration we’ve already made for two of our older kids and now we are about to throw a party for our youngest one. It is the day our son testifies in front of our families and friends that his dad and I taught him about biblical sexuality and what it means to be a sexually pure person. That means, when he turns 30th, he can’t stand and say, “My parents didn’t tell me.”

BTW, my first book – “Beyond the Fairy Tale” came to life because of “Bar Mitzvah”