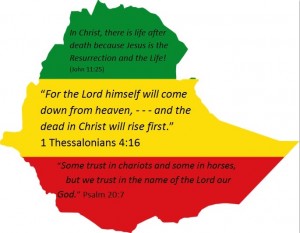 As you all might have already heard, there is a mourning vigilant across Ethiopia for three days starting today to remember the Ethiopian Christian martyrs who had fallen in the hands of ISIS. So, today, Tuesday, April 21, 2015, I and all the A4P ministers want to dedicate the Appeal for Purity Ministry Facebook page for that purpose only.

Not to mourn, which we all are doing right now, but also to celebrate the lives of our brothers who courageously stood on their faith and laid their lives down. We all are sad to see them depart from this life like this, at this age but God is in control of everything; and we know that the Bible says: “Brothers and sisters, we do not want you to be uninformed about those who sleep in death, so that you do not grieve like the rest of mankind, who have no hope.” (1 Thessalonians 4:13) We don’t grieve like the world because WE HAVE HOPE IN CHRIST JESUS!

Moreover, we shouldn’t be uninformed or unaware of our enemy’s scheme in all this. He wants to bring us all down with sadness and sorrow. He wants to use fear to steal our faith we have in Christ; he wants us to think that we are waging war against blood and flesh; instead of against the rulers, the authorities, the powers, the principalities of this dark world and the spiritual forces of evil in the heavenly realms (Ephesians 6:12). He wants to sow the seed of hate in our hearts to stray us away from the love we are commanded to hold on to (1 John 4). So, let’s remind and encourage each other of the truth of God! Let’s lift each other’s spirit up in the spiritual truth revealed in the Word of God.

In the meantime, I want to address one question that was left off on yesterday’s post, asking me to clarify why ISIS kills not only Christians but Muslims too.

Well, I honestly and frankly, don’t know why ISIS kills innocent Muslims while ISIS itself claims to be a Muslim religion organization. I am not sure what their book says about this issue but my guess is one of them, ISIS or Muslims who are slain by ISIS, is not following their book correctly.

“Which one of them is not following the book?” – I don’t know. I think that is the question they have to answer, not me. What their book says about killing Christians and Jews and the reward the killers receive in the paradise might be clearly written in their book and the interpretation might be controversial. Again, I’m not sure. All I know right now is this: My Ethiopian Christian brothers are killed by ISIS because they refused to denounce their Christian faith.

May the mercy and grace of God fall on all of us! As Jesus prayed on the Cross (Luke 23:34), I choose to pray to each ISIS killer saying: “Father, forgive them; for they not know what they are doing!”

To the family and friends of the fallen, my prayer is: “May the Comforter of all, the Holy Spirit Himself comfort you! May He fill you with the spirit of joy and peace which passes all human understandings! I ask this in the name of Jesus Christ our Lord and Savior, Amen! ///