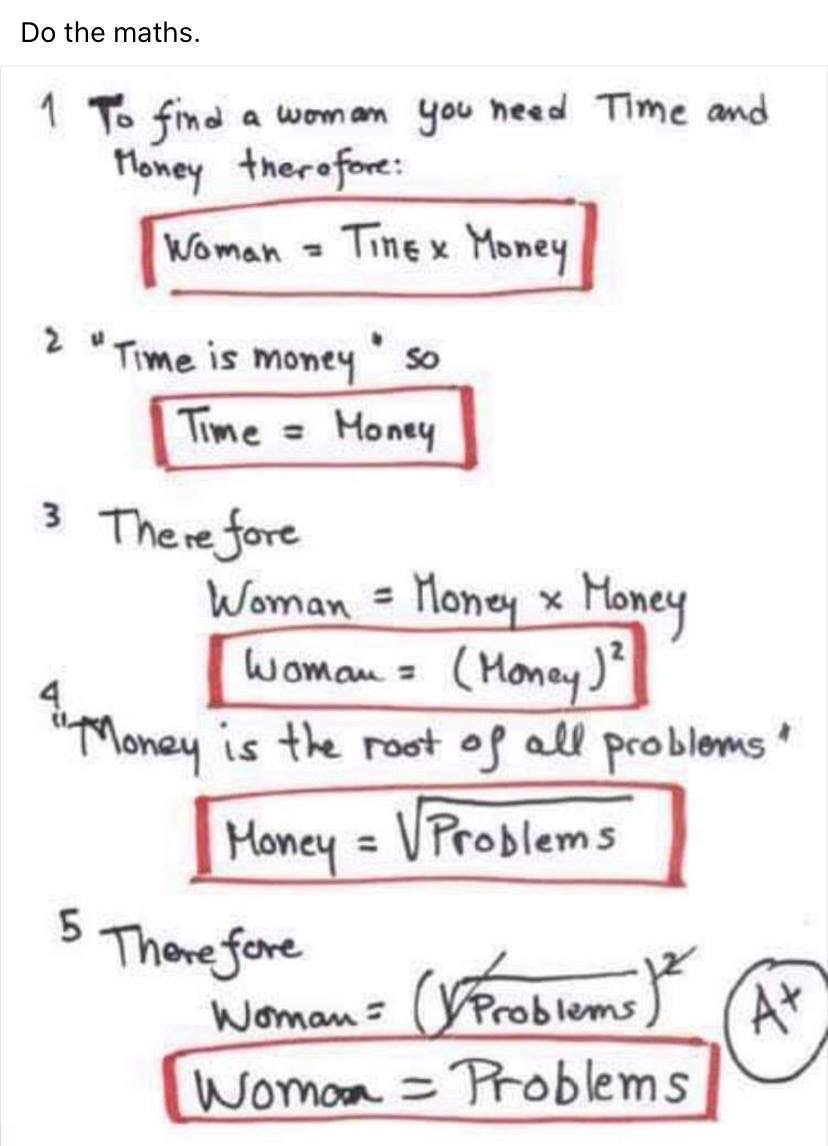 And I love this joke very much. But it may rub some women the wrong way. If it did, keep on reading.
Some writers/speakers on the topic of man’s brain, how it functions and all that, they say, “Men always carry a hummer in their brain to hit any nail that comes out of its place,” to say in short, “Men are problem solvers.”
First time I heard this, I said, “No wonder men get attracted to us women when they see us! We’re not only beautiful and fascinating creatures for them but we also attract them by presenting ourselves to them as a problem to be solved.”
So to show us and to the watching world how brave, wonderful, wise and knowledgeable they are, they run and come to us, assuming that they can “solve” us🥴🤣🙃😅.
Then to their nightmare, they cannot even live with us for a day with peace and joy unless they kneel down and pray and ask God to help them.
But can you imagine what a man’s life will be without a woman?
Hello!!!!!
We women sure are made of sugar and spice and everything nice!
Putting the joke on a side though, God said, “It is not good for a man to be alone.” Genesis 2:18
Well, if it is not good for a man to be alone, what is good then?
For a man to have his own wife, his own woman!
So God created the woman. How? He took her out of a man’s body. So pretty much the woman came out the man.
Paul writes, “For man did not come from woman, but woman from man;” 1 Corinthians 11:8
So, when you look at the joke “biblically,” who is the root of the problem?
I mean, you don’t want me to answer that simple question, do you? I don’t think so.
The Bible says, God took one rib from a man to make a woman. Have you ever thought what kind of nature we women would have if God had taken like four or five ribs out of the man to make us women??
So I think, all men should be very happy and thankful that only one rib was taken out of them to make us women.
And I assume that this picture I am sharing with you is made by a man. Maybe he was thinking of making us women look bad but he didn’t know or forgot that we women were found from men.
No, I won’t follow his example to call men the root of all problems but I will simply close my thoughts with this, leaving out the details:
“A man ought not to cover his head, since he is the image and glory of God; but woman is the glory of man. For man did not come from woman, but woman from man; neither was man created for woman, but woman for man. It is for this reason that a woman ought to have authority over her own head, because of the angels. Nevertheless, in the Lord woman is not independent of man, nor is man independent of woman. For as woman came from man, so also man is born of woman. But everything comes from God.” 1 Corinthians 11:7-12
In case you missed it, it says, “woman is the glory of man.” We women add glory and value to our men. ///